Areola and Nipple Reduction in Connecticut and New York By Shareef Jandali M.D. on October 04, 2014

Breast size and shape are not the only things that vary across women - nipple and areola size can also be drastically different from one woman to another. Most women have one nipple or areola that is slightly larger than the other, but it is hardly noticeable (except to maybe the women themselves). However, sometimes the asymmetry can be more pronounced and can be a major concern and embarrassment. In addition, sometimes either the nipples or the areolas (the dark skin around the nipples) are both excessively large or prominent. 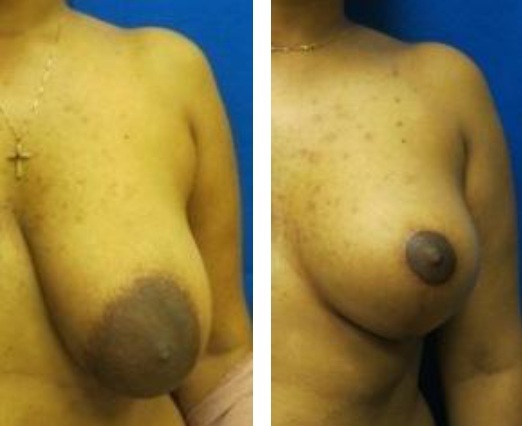 For women in Connecticut and New York with different sized areolas or excessively large areolas, this can be surgically corrected with a minor procedure. It often bothers women cosmetically and they are very self-conscious about very large or uneven areolas that cover up most of the breast. If it is only one areola that is larger, this can be reduced in size in order to match the other one. If both of the areolas are enlarged, they can both be reduced in size with a procedure called a periareolar mastopexy. This procedure removes the excess outer areola skin and shrinks down the surrounding skin to a smaller areolar size. Permanent sutures are used underneath the skin in order to prevent widening again after surgery.

The scars are minimal and are hidden at the border of the new smaller areola and the surrounding skin.  If the breasts have sagged significantly with time, this is often performed with a breast lift, where there is an extra vertical scar from the areola down to the fold underneath the breast. This short procedure is performed as outpatient surgery.

For women in Connecticut and New York with excessively large or prominent nipples, this can also be surgically corrected. Excessively large or thick nipples can bother a patient in multiple ways. First, it can be painful because they rub against a woman’s bra or clothes and can become irritated and tender. Often, women wear nipple shields in order to pad and protect them from constant friction and irritation. Further, it can be embarrassing to always have large nipples which appear erect at all times. Due to their prominence, large nipples show through almost all blouses and even thicker clothing.

Surgery for Large or Long Nipples

Surgical correction and reduction of excessively large or long nipples is performed by one of two techniques, which is customized to the patient. The first technique removes the outer end of the nipple and then the skin is sutured closed. The second technique removes the lower half of the nipple and then the remaining nipple is folded down and the skin is closed. This procedure can be performed under local anesthesia in our Fairfield County office procedure room. The recovery is minimal and the scars are hardly visible.

Areola and nipple reduction are performed by Board Certified plastic surgeon Dr. Shareef Jandali.  If you are interested in a consultation, call 203-374-0310 to set up an appointment at our plastic surgery office in Fairfield County, Connecticut.  We look forward to seeing you!